At Maverick Learning, we provide result oriented tutoring programs specifically aiming the following Math and Science contests to help students improve the overall mathematical thinking and knowledge. The certificates, medals and higher level invitations are the highlights for universities to put into the admission consideration.

The International Junior Science Olympiad is an annual science competition for students aged 15 and under. It is one of International Science Olympiads and the only international academical competition that covers physics, chemistry and biology at the same time. We provide IJSO preparation tutoring for Grade 6+ students with solid knowledge base and problem solving skills in physics, chemistry and biology. We are proud to have the 2020 Canada Gold medalist rising from Maverick Learning Center. 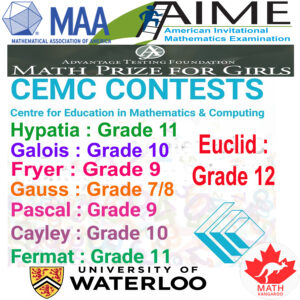 The Centre for Education in Mathematics and Computing (CEMC) is Canada’s largest and most recognized outreach organization for promoting and creating activities and materials in both mathematics and computer science housed within the Faculty of Mathematics at the University of Waterloo.

Its mission is to increase interest, enjoyment, confidence, and ability in mathematics and computer science among learners and educators in Canada and internationally.

The CEMC administers the Canadian Mathematics Competitions (CMC), written annually by over 200,000 students from around the world. As one of the Official Competition Writing Center, Maverick Learning Center also  helped lots of local students to get the solid knowledge base and psychologically well prepared for the contest with medals and perfect scores over the years. The contests are listed by grade below.

The American Mathematics Competitions (AMC) are the first of a series of competitions in secondary school mathematics that determines the United States team for the International Mathematical Olympiad (IMO). The selection process takes place over the course of roughly four stages. During the last stage, the Mathematical Olympiad Summer Program (MOP), the United States coaches select six members to form the IMO team. For the students want to apply the universities in US after high school, the high performance of AMC will shine the application a lot. For the students love math and challenges, AMC will be a great and fun experience. As one of the Official Competition Writing Center, Maverick Learning Center helped lots of local students to get the solid knowledge base and psychologically well prepared for the contest with achievement, honor and distinguishment over the years.

There are three levels:

Students who perform well on the AMC 10 or AMC 12 exams are invited to participate in the American Invitational Mathematics Examination (AIME). Students who perform well on the AIME are then invited to the United States of America Mathematical Olympiad (USAMO) or United States of America Junior Mathematical Olympiad (USAJMO). Students who do exceptionally well on the USAMO (typically around 30 students) are invited to go to the Mathematical Olympiad Summer Program (MOSP or more commonly, MOP), and six students are selected from the top twelve scorers on the USAMO (through yet another exam, the Team Selection Test (TST)) to form the United States International Math Olympiad Team.
American Mathematics Competitions is also the name of the organization, based in Washington, DC, responsible for creating, distributing and coordinating the American Mathematics Competitions contests, which include the American Mathematics Contest, AIME, and USAMO.
There are certain rewards for doing well on the AMC tests. For the AMC 8, a perfect score may earn a book prize or a plaque (as it did for the students who achieved perfect scores in 2002); a list of high scoring students is also available to colleges, institutions, and programs who want to attract students strong in mathematics. This may earn a high scorer an invitation to apply to places like MathPath, a summer program for middle schoolers. The top-scoring student in each school is also awarded a special pin.
For the AMC 10 and AMC 12, a high score earns recognition (in particular, perfect scorers’ names and pictures are published in a special awards book); as with the AMC 8, a list of high-scoring students is also available to colleges, institutions, etc. The top-scoring student in each school is awarded a special pin, or a bronze, silver, or gold medal, depending on how many times he or she was the top scorer.
In addition, high scorers on the AMC 10 and AMC 12 qualify to take the next round of competitions, the 3-hour long American Invitational Mathematics Examination (AIME), typically held in March or April. Any student who scores in the top 2.5% on the AMC 10 or scores in the top 5% on the AMC 12 is invited to take the AIME.
AMC 8
The AMC 8 is a 25 multiple-choice question, 40-minute test for middle schoolers designed to promote the development and enhancement of problem-solving skills. No problems require the use of a calculator, and their use has been banned since 2008. The contest is typically held in November. In 2018 the AMC 8 took place on Tuesday, November 13.
The AMC 8 is scored based on the number of questions answered correctly only. There is no penalty for getting a question wrong, and each question has equal value. Thus, a student who answers 23 questions correctly and 2 questions incorrectly receives a score of 23. This is not a standardized test; i.e. no school has to take it, but some schools choose to, mainly to encourage growth in mathematics among their students.
Rankings and awards
Ranking
Based on questions correct:

AMC 10 and AMC 12
The AMC 10 and AMC 12 are 25-question, 75-minute multiple choice examinations in secondary school mathematics containing problems which can be understood and solved using pre-calculus concepts. From 1994-2007, calculators were allowed, but like the AMC 8, are unneeded.
Since the 2007-2008 school year, calculators have been disallowed on all of the selection tests for the International Math Olympiad Team (including AMC, AIME, USAMO, TST)
High scores on the AMC 10 or 12 can qualify the participant for the American Invitational Mathematics Examination (AIME). On the AMC 10, the top 2.5% make it; or around 110 to 120 points. On the AMC 12, the top 5% make it; or around 90 to 100 points.
Each exam is scored based on the number of questions answered correctly and the number of questions left blank. A student receives 6 points for each question answered correctly, 1.5 points for each question left blank, and 0 points for incorrect answers. Thus, a student who answers 24 correctly, leaves 1 blank, and misses 0 gets 24×6 + 1×1.5 = 145.5 points. The maximum possible score is 6×25 = 150 points.
The exams somewhat overlap, with the medium-hard AMC 10 questions being the same as the medium-easy ones on the AMC 12. Since 2002, two administrations have been scheduled, so as to avoid conflicts with school breaks. Students are eligible to take an A exam and a B exam, and may even take the AMC 10-A and the AMC 12-B, though they may not take both the AMC 10 and AMC 12 from the same date. If a student takes both exams, they may use either score towards qualification to the AIME or USAMO/USAJMO.